COLOR OF TENDERNESS, by Geni Guimarães, Illustrated by Saritah Barboza, Translated and Introduced by Niyi Afolabi 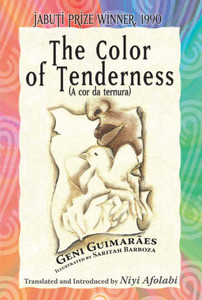 COLOR OF TENDERNESS, by Geni Guimarães, Illustrated by Saritah Barboza, Translated and Introduced by Niyi Afolabi

At a time when race relations continue to divide more than provide a road map to genuine equality among different people across cultures, nations, and religious beliefs, Geni Guimarães’s A Cor da Ternura (1989) [Color of Tenderness] remains relevant, over twenty years after its publication. The issues of invisibility and marginality do have their place and one may add that as this is an autobiographical piece, Guimarães may not have set out to be ideological per se, since most of the instances of racial tension portrayed in her work are subtle, anecdotal, reconciliatory rather than indicting.  This may be predicated on the original target audience—seemingly juvenile, yet the material is serious enough to appeal to a broad readership, as confirmed by the prized Jabuti award (1990).  The translation of this work ensures that Afro-Brazilian literature, in its many facets of culture, race, gender, and sexuality, takes its place alongside masterpieces of World literature.

ABOUT THE EDITOR, ILLUSTRATOR & TRANSLATOR

Geni Guimarães is a writer and retired school teacher living in Barra Bonita in the state of São Paulo (Brazil).  She is the author of A Cor da Ternura, Terceiro Filho, Da Flora o Afeto, and Balé das Emoções. She won the Jabuti Prize for Brazilian Literature in 1990.

Saritah Barbosa is the illustrator of A Cor da Ternura.

Niyi Afolabi teaches in the Departments of Spanish and Portuguese and African and African Diaspora Studies at the University of Texas at Austin.  He is the author of Afro-Brazilians: Cultural Production in a Racial Democracy and has translated a number of works by Afro-Brazilian writers especially the Quilombhoje collective.