CLIO IN A SACRED GARB: Essays on Christian Presence and African Responses, 1900-2000 by Ogbu U. Kalu 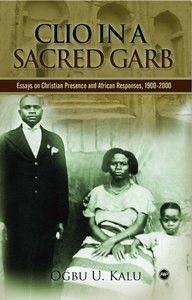 CLIO IN A SACRED GARB: Essays on Christian Presence and African Responses, 1900-2000 by Ogbu U. Kalu

This book consists of essays on African church history: historiography, context (ecology and worldviews), the missionary enterprise and African responses that explain the massive growth of Christianity in contemporary Africa. Some essays have been published; others are unpublished, or rewritten to fit into a theme. Clio is the ancient Muse of History. When dressed in a sacred garb, the muse performs for religious people and, in this case, for church historians. The essays address the cutting edge of contemporary African church historiography and the process of appropriation of the gospel in the encounter with Christianity. The essays contend that culture-contacts, as in the missionary movement, involve configurations of power. Thus, culture, conversion, and civilizing mission are power concepts that dominated the relationship between white missionaries and black Christians even after decolonization. The African context, shaped by diverse cultures, ecosystems, worldviews and poverty explain the changing faces of Christianity. The essays explore the contributions of African Americans in the evangelization of Africa and illustrate the core of the missionary enterprise with the Edinburgh Conference of 1910 and the impact of the World Wars. The antistructural Ethiopianism movement heralded African responses. Massive religious innovations followed apace generating a welter of forces that compelled the decolonization of the church by 1975. Thereafter, charismatic and Pentecostal movements catalyzed enormous growth and reshaped the African religious landscape. But the “trauma of growth” has challenged the depth of discipling, the models of theological education and ministerial formation.

ABOUT THE AUTHOR
Ogbu U. Kalu, PhD, DD is the Henry Winters Luce Professor of World Christianity at McCormick Theological Seminary, and Director of the Center for Global Ministries, Chicago. Dr Kalu served as the Secretary of West African Association of Theological Institutions, Chairman of Conference of African Theological Institutions, and one of the three Directors of the Commission on the History of the Church in the Third World, an arm of the Ecumenical Association of Third World Theologians. Dr Kalu taught as a full professor at the University of Nigeria, Nsukka (southeastern Nigeria).He has published 16 books including Divided People of God: Church Union Movement in Nigeria (1978), The History of Christianity in West Africa (1980), African Church Historiography: An Ecumenical Perspective (1988), Embattled Gods: Christianization of Igboland (1996 and 2003) Power, Poverty and Prayer: The Challenges of Poverty and Pluralism in African Christianity (2000 and 2006) and African Christianity: An African Story (2005 and 2007) and over 180 journal articles and chapters in edited works. He is a contributor to volumes eight and nine of the Cambridge History of Christianity: World Christianities (2005).