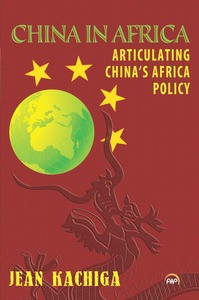 China in Africa Articulating China’s Africa Policy examines the rise of China and how the country is adjusting to its increasingly growing status, role and influence in international politics. It is indeed in the context of consolidating that rise that today’s China’s presence in Africa can be explained.

The book, therefore, focuses on China’s investments strategy in Africa in the context of China’s rising economic and strategic clout. China needs market-entry investments and resources access strategies to support its growing economy, and its expending manufacturing sector. The low market entry and abundant raw materials situation of the African continent offers to China this opportunity.

In this study, the book articulates China’s approach to engaging Africa in contrast with the Western approach. It sheds light on what seems to be a calibrated approach, showcased with China’s involvement in the countries of Sudan, Zimbabwe, Nigeria, Angola and South Africa.

With numerous chapters written from the African perspective, the book also examines the responses and reactions of African governments and the people in general, and addresses the tensions that have sporadically emerged.

Finally, the books assesses overall the chances for success of China’s involvement in Africa on one hand,  and addresses the need for Africa to appropriate the necessary tools for an internally induced process of economic development.

JEAN KACHIGA, earned his Ph.D. at the University of Frankfurt in Germany. He is currently at the State University of New York at Brockport where he teaches International Relations, International Political Economy, and Global Issues among other courses. His research interest focuses on the dynamics of change in international politics. Dr. Kachiga examines changing paradigms in international politics, the adjustment strategies by state-actors and how such adjustments induce a shifting hierarchy of wealth, status, role and power, and heralds new epochs.