BETWEEN FAITH AND HISTORY: A Biography of J. A. Kufuor, by Ivor Agyeman-Duah(HARDCOVER) 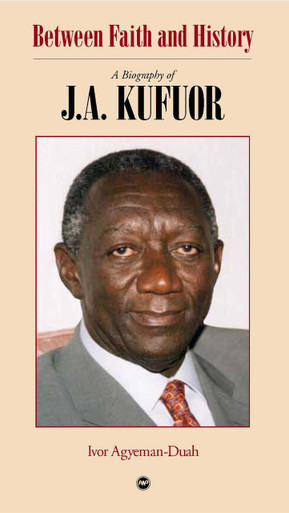 BETWEEN FAITH AND HISTORY: A Biography of J. A. Kufuor, by Ivor Agyeman-Duah(HARDCOVER)

The road to John Agyekum Kufuors presidency was tortuous and reflects Ghanas political history, which since Kwame Nkrumah led to independence in 1957 and had been dominated by military interventions and dictatorships. Groomed for this job by some of Ghanas first generation politician, Kufuor became Deputy Foreign Affairs Minister of Ghana at 30 after attending Oxford University. And he has since known no other profession. Woven in politics of Ghana especially the 1990s in which he was a major player, Kufuors election to the high office was also critical for democratic development in Ghana. Since 1957, there has never been a successful transition of power from one government to another, without some disruptionand this book captures some of those momentous events as well.

A good biography reveals not only the life of its subjects but also the times in which the person lived. If the biography is of a politician, the book should encompass insights into the politics of the era. Ivor Agyeman-Duahs book about President J. A. Kufuor achieves that fusion of narrative between the biography of a man and the history of a country.

Ivor Agyeman-Duah draws on extensive knowledge of orally transmitted materials and interprets these with reference to evidence drawn from a broad range of documentary sources. Between Faith and History follows this exemplary style. He thus exemplifies the ability to combine traditional and modern scholarship that was characteristic of the seminal researches of his late and revered father, Joseph Agyeman-Duah..

ABOUT THE AUTHOR
IVOR AGYEMAN-DUAH, a former research fellow at Harvard University, is head of the public affairs diplomacy at the Embassy of Ghana in Washington, DC. A cultural historian, he is also a documentary film producer and journalist and was part of the team that created the BBC and PBS series Into Africa and Wonders of the African World. He has published six books.