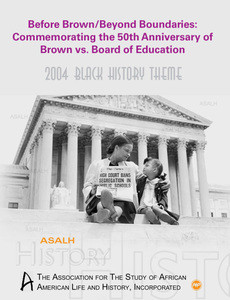 May 17, 2004 will mark the 50th anniversary of the landmark Brown v. Board of Education desegregation decision. This case is considered to be the most important legal case affecting African Americans in the twentieth century and one of the most important Supreme Court decisions in U. S. Constitution history.

Brown v. Board of Education combines separate cases from Kansas (Brown et. Al v. Board of Education of Topeka), South Carolina (Briggs v. Elliott), Delaware (Belton v. Gebhart), Virginia (Davis v. County School Board of Prince Edward Country, Virginia), and the District of Columbia (Boiling v. Sharpe). The Brown companion cases presented segregation at its worst. Although supposedly guaranteeing African Americans “separate but equal” education, schools for African Americans were never equal as many were in run-down buildings with overcrowded classrooms. Many schools had no indoor plumbing or heating and there was little money for books and supplies. Bus service was rarely supplied for African American children who often had to walk past better-equipped white schools to attend segregated schools.

The NAACP (National Association for the Advancement of Colored People) decided to challenge segregation in schools and took the Brown cases to the Supreme Court. After combining the five cases in one large case, the Supreme Court ruled that segregated schools were illegal. Speaking on behalf of the Supreme Court, Chief Justice Earl Warren found that “in the field of public education the doctrine of ‘separate but equal’ had no place. Separate education facilities are inherently unequal.” Brown v. Board of Education signaled the end of the legality of segregation.

This book will serve as a helpful curriculum guide to educators interested in teaching the details of one of the most important legal cases in African American history.