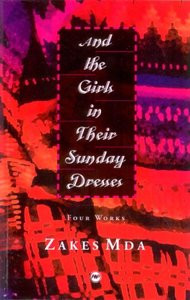 Two very different women meet during a long wait to buy subsidized rice and discover they have more in common than their poverty; an old man and a child share a last loving waltz; a cynical, disabled gangster learns humanity from a committed social worker, and a young girl finds her missing father and her role in the political struggle.

This collection of stage plays, one radio play and a cinepoem, captures the essence of Zakes Mda’s method as a dramatist- a slow but intimate process of revelation (on the part of the characters). It is an artistic cooperation of the most pleasurable kind.

ABOUT THE AUTHOR
ZANEMVULA (ZAKES) MDA, writer, painter and musician, was born in the eastern Cape and was educated in South Africa, Lesotho, Switzerland and the United States. His first plays were written while he was still in high school and, during a career, which included seven years at the University of Lesotho, he continued to write for both stage and film and has produced and directed several films for UNICEF and the World Health Organization. In 1992 he moved to Yale as a Research Fellow and in August 1993 to the University of Vermont as a visiting Professor of Literature.