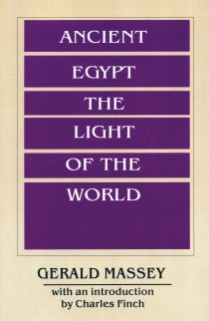 In the first volume of Ancient Egypt, Massey was primarily concerned with elaborating how the first humans emerging in Africa created thought. What had been evident to him from the outset was that the myths, rituals and religion of ancient Egypt--or Old Kam--had preserved virtually intact a record of the psychomythic evolution of humanity.

In the second volume, Massey examines the celestial phenomenon known as the Precession of the Equinoxes. He believed only by understanding this phenomenon was it possible to fathom Nile Valley history. He provides the reader with extensive detail on the interconnection of the two. The last half o f the second volume is devoted to the Kamite sources of Christianity. Massey demonstrated the manner in which New Testament Christianity evolved directly out of the Osirian mysteries.

Massey pioneered the effort to connect Old Kamite thought to its origin in Africa's antiquity. His conclusions, which are constantly being verified, showed that Kamite thought was the direct progenitor to the philosophy, metaphysics, religion and science that eventually shaped Western civilization.