ALLIANCE AND ALIENATION: Ethiopia and Israel in the Days of Haile Selassie, by Haggai Erlich 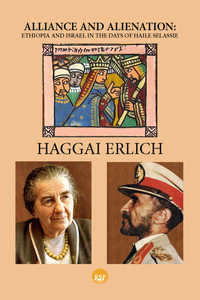 ALLIANCE AND ALIENATION: Ethiopia and Israel in the Days of Haile Selassie, by Haggai Erlich

In practice, they had faith with the Israelis, and they entrusted them with nearly everything, primarily the training of the armed forces, intelligence, and security. From the Israeli point of view, Ethiopia was part of what David Ben-Gurion envisioned in 1958 as a "Periphery Alliance," which was supposed to comprise Turkey, Iran, Ethiopia, and Israel, and counter the momentum of revolutionary pan-Arabism. A treaty with Haile Selassie's Ethiopia could ensure Israel's free navigation in the Red Sea, and provide intelligence and operational bases at the back doors of Egypt and the Arab Peninsula. It also carried the promise of strengthening Israeli diplomatic and economic interests in emancipating Africa, and enhancing its legitimacy in the family of nations. At that time, Ethiopia was important enough for Israel to avoid caring meaningfully for the country's Jews. In trying to deepen this strategic connection, Israel invested more in Ethiopia than she ever invested in any other country.

This book follows these relations as they developed along the modern history of the Middle East and Africa, and as they were influenced by ancient Christian, Islamic, and Judaic legacies. It attempts to reconstruct the complex relations between the two states and explain why they ended in the expulsion of the Israelis from Ethiopia in one of their most painful hours.  For Israel, this split became a side story of the trauma of the 1973 Yom Kippur War, and it has remained a bad memory in the context of her relations with Africa in general and Ethiopia in particular. For Haile Selassie's regime, the expulsion of the Israelis turned quickly into one of the reasons for its dramatic 1974 collapse, and for the rise of Mangistu's dictatorship out of all other options.

“An excellent, original, fascinating and well documented study written by an internationally reputed and a leading historian. No other book examines so clearly and in depth the Emperor's duality and complex policy towards Israel and the Islamic world. The book analyzes also the political and strategic interests of Israel in Ethiopia that drove her to embark on a wide range of activities in this leading African country.”

"A  state of historical connectedness has existed between the people of Israel and Ethiopia since biblical times. However, the political relationship between the two governments has been more than ambivalent, especially after the Second World War. The erudite historian, Dr. Haggai Erlich, has given us a brilliantly researched, well documented and stimulating book, in which this intricate liaison and the overall political scenario in Emperor Haile-Selassie's Ethiopia is most commendably described."

Haggai Erlich, ( Ph.D. SOAS, London U. 1973) is Professor Emeritus at Tel Aviv University and an historian of Ethiopia, the Horn of Africa, the Nile, Egypt, and the Middle East.  Among his twenty one books: Ras Alula and the Scramble for Africa; The Struggle Over Eritrea; Students and University in Egyptian Politics; Ethiopia and the Middle East;  Egypt, Ethiopia and the Nile;  Islam and Christianity in the Horn of Africa – Somalia, Ethiopia, Sudan. He is the winner of the Landau Prize for African Studies, 2010.