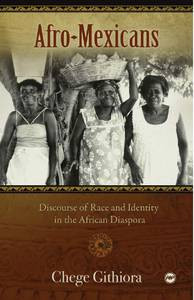 This book is about a little known branch of the African Diaspora—Afro-Mexicans. It discusses their conditions of arrival and establishment in Mexico within the context of Spanish colonialism, and the race-based socio-economic hierarchy known as sistema de castas which provided a basis for the contemporary socioracial terms that are the focus of the main study: indio, blanco, negro and moreno. Today, these terms are used ubiquitously in variable ways as tags of social identity in Mexican discourse. An ethnographic sketch of a representative Afro-Mexican community located in the state of Guerrero then provides a setting for the analysis of their contemporary uses. These are then tied to concepts of “race” and identity in Mexico, all within the wider context of modern global Diaspora formations.

Employing standard methods of discourse analysis, the author performs a close, intersubjective study of transcribed, naturally occurring language data (with interlineal translations) such as conversational samples, oral narratives, arrival myths, legends, corridos, and popular literature comics, to demonstrate how socio-racial terms are used as “footing” devices (Goffman 1981). While local meanings appear to be informed by a social context confined to a particular speech community, they can also be linked to wider domains of talk, thus highlighting differences between mainstream and local communicative functions. Data from popular literature starkly illustrate this gap, and also how racism is reproduced in everyday talk at the national level.

The book’s conclusions add to the reader’s understanding of discourse about “race” and ethnicity within the complex Latin American sociocultural context. They also highlight elements of racism existing in certain language practices and popular culture productions of Mexico, and contribute to the understanding of “race” as a social construction. This study of conditions under which contact between native Americans, Africans and Europeans took place in the New World underscores the case for further research into Afro-Hispanic encounters, and the African’s adaptation and contribution to the language and culture of the (New) World society.

I know of no other recent work in sociolinguistics that so carefully and productively focuses on shades of sensitive word meaning in local discourse and goes on to apply those findings to a country-wide setting
—Dennis R. Preston, University Distinguished Professor, Department of English, Michigan State University

In a world increasingly characterized by cultural homogeneity and hybridity Dr. Githiora offers us an intellectual tour de force for deciphering the intricate and ever-evolving relationships among language, “race” and national identity.
—James A. Pritchett, Professor of Anthropology and Director, African Studies Center. Boston University.

This book is an insightful addition to the growing body of invaluable research in the field of Diaspora Studies, a body of work which has contributed significantly to modern social scientific study, and continues to produce important findings on sociohistorical processes, linguistic innovations, and cultural adaptation, shedding light on the present and possible future of modern societies in this era of globalization
—Paru Raman, Lecturer in Social Anthropology and Chair, Centre for Diaspora and Migration Studies, University of London (SOAS)

ABOUT THE AUTHOR
Chege Githiora was born and raised in Kenya. He lived in Mexico for six years before proceeding to the U.S. for his doctoral studies at Michigan State University. He taught Swahili at El Colegio de Mexico and Boston University before taking up his current position at the University of London (SOAS). He is the author of Diccionario Swahili-Español published in 2002 by El Colegio de Mexico.