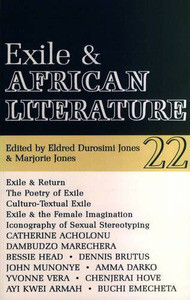 Apartheid was one of the most oppressive, but by no means the only regime to drive African writers into what Eldred Jones calls "the disorienting but sometimes mentally productive state of exile."

Buchi Emecheta recently acknowledged that she probably would not have written is she had not been thrown upon her own resources in South London. Bessie Head escaped from her past in South Africa and was met with the difficulties of getting citizenship in Botswana. Ayi Kwei Armag tried Dakar, New York and Dar es Salaam.

This volume explores the recurring theme of exile in African literature, both as physical and mental alienation.

ABOUT THE EDITORS
ELDRED DUROSIMI JONES & MARJORIE JONES were both editors of Africa Literature Today from 1968 to 2001.