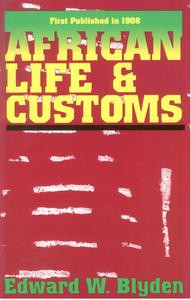 African Life & Customs is an essential collection of Edward Wilmot Blyden's articles that examines the socioeconomic structure of African Society. A native of St. Thomas, West Indies, Blyden (1832-1912) lived most of his life on the African continent. He was an accomplished educator, linguist, writer, and world traveler, who strongly defended the unique character of Africa and its people.

In African Life & Customs, Blyden examined the culture of "pure" Africans--those untouched by European and Asiatic influences. He identified the family as the basic unit in African society and polygamy as the foundation of African families. He described African social systems as cooperative; everyone worked for each other. No one went without work, food, or clothing.

Blyden challenged white racial theorists who held Africans were inferior and whose arguments supported their preconceived ideas. He assumed Africans to be "distinct" rather than inferior, and he analyzed African culture within the context of African social experiences.

Although some regarded Blyden's views as controversial  during his time, today, upon reevaluation, his work is seen by many as an important attempt to perform a holistic analysis of African society.