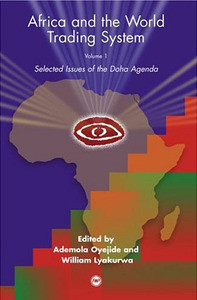 This three-volume set presents results of a research project initiated by the African Economic Research Consortium (AERC). Titled Africa and the World Trading System, the project intended to identify and examine the critical analytical and policy issues involved in Africa’s economic links with the rest of the world, particularly in the context of the emerging global trading system. Conducted by some of the leading specialists in African and global trade issues, the project had two distinct but closely inter-related component parts. The first consisted of research that was analytical and/or empirical in nature but region-wide in scope and focus. This component was designed to provide the framework for the selection of the menu of issues that was subsequently explored in greater detail, using the country case study approach, in the project’s second component. The framework papers generated in the first component of the project are presented in Volume I, while the country case studies are contained in Volume II. Volume III contains papers presented at the project’s dissemination workshop.

The ten framework papers presented in Volume I cover a range of issues that can be broadly categorized into four. These include questions related to the post-Uruguay Round access conditions facing African exports, particularly in their major markets, and the extent to which the systemic reforms and rule changes embedded in the “new” issues introduced into the multilateral trade agenda have affected or are likely to affect African countries. The other two broad categories of issues are the implications of the UR agreements for the development strategy that may be pursued by African countries, and questions about the extent and effectiveness of African participation in the World Trade Organization process.

ABOUT THE EDITORS
ADEMOLA OYEJIDE, professor of economics at the University of Ibadan, Nigeria, is also a member of the advisory panel for the World Trade Organization. A specialist in trade, trade policy, and regional integration, he holds a PhD in economics from Princeton University.

WILLIAM LYAKURWA is Executive Director of the African Economic Research Consortium (AERC), having served as Deputy Executive Director and Director of Training for over ten years. He holds a PhD from Cornell University and has experience as adviser on trade policy and trade promotion to the governments of Tanzania and Uganda, and to the International Trade Centre (ITC) in Geneva.

DOMINIQUE NJINKEU, Deputy Director of Research at the African Economic Research Consortium, has been actively involved in capacity building for international trade negotiations. He holds a PhD in economics from Southern Illinois University at Carbondale.