A Time to be Born: The Feyisa Lilesa Story By Stephany Evans Steggall (HB) 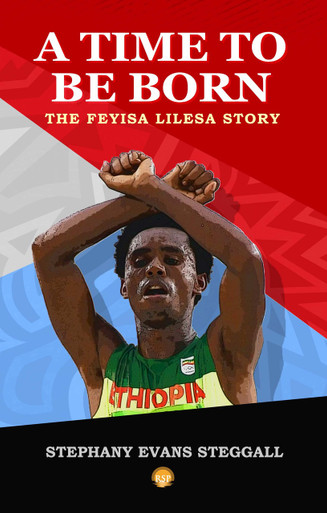 A Time to be Born: The Feyisa Lilesa Story By Stephany Evans Steggall (HB)

A Time To be Born explores a young athlete’s decision to seize an opportunity, to defy his government, to break the silences, to expose the hidden truths in Ethiopia, to risk death and pay the price of exile.

Feyisa Lilesa, an Ethiopian runner, reached the finish line in the men’s marathon at the 2016 Olympic Games with his arms raised above his head, crossed at the wrists. Crossed wrists represent a non-violent protest sign: they symbolise the handcuffs of captivity; voluntary restraint of coiled power; and outward palms with no weapons hidden. He won the silver medal and the attention of the world.

The book is a gripping account that will open readers’ eyes wide to the fascinating life story of a legendary East African runner whose courage is comparable to that of his various heroes, political and athletic, described in the book. The narrative memoir belongs to Feyisa, an Oromo, the largest ethnic group in Ethiopia.

The concept of a time to be born is a very deeply held cosmological belief of the Oromo. Feyisa wonders, as he tells his story, if he was born at the right time. His prophetic name means 'saviour' or 'healer'. He is a runner, not a statesman, but Oromo culture and politics define his life.

In times past Ethiopian protesters rallied under political leaders; this time they responded to a young athlete. Feyisa Lilesa led the way to victory with his symbolic protest gesture at the 2016 Olympic Games in Rio de Janeiro. All he could think about as he approached the finish line in the men's marathon were his people dying back home in Ethiopia. He saw flashbacks of the enormous tragedy. He wanted the world to know and act and share his burden. The crossed wrists were raised to reach a better future.

Dr Stephany Evans Steggall is the author of several biographies of Australian authors, including Thomas Keneally. She has also written family and institutional histories. She taught English at an international school in Addis Ababa in 2016.