A NATION BETRAYED: Nigeria and the Minorities Commission of 1957, by Michael Vickers 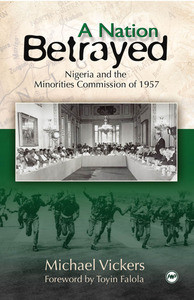 A NATION BETRAYED: Nigeria and the Minorities Commission of 1957, by Michael Vickers

The 1950s were traumatic years for the British.  A mighty Empire was in its death-throes.  But for Africans these were years of immense exhilaration, of great expectations.  Independence was within close reach.  And in Nigeria, it was accepted that it should come quickly.  But there was a problem.  Nigeria’s minorities, peoples—comprising about 40 per cent of the country’s population—profoundly feared for their future under African leaders free of British imperial control. They demanded protection.  This study reveals the remarkable story of how and why the British authorities betrayed the Nigerian people in relation to their treatment of this critical minorities issue, an issue of their own (British) making—with the horrific consequences which were shortly to follow.  Revelations about the British Authorities; about leading Nigerian figures including Chief Awolowo, Dr. Azikiwe, the Sardauna of Sokoto Sir Ahmadu Bello, Prime Minister Balewa and many others is all rivetting stuff.  More ominously, the shadow of “civil war in the making,” and the crucial contribution of the British and the Minorities Commission, hover close.  In the broader sense, A Nation Betrayed provides a severe reminder that just consideration of minorities' claims, indeed the claims of any challenger to a governing authority, is something not easily achieved.  It shows too how a departing imperial authority may ensure retention of amicable and beneficial relations with the incoming independent authority, and indeed with its successors.  Given the persistence of minorities' demands today on a world-wide scale, perhaps the principal message to be taken from this study is:  “to be forewarned is to be forearmed.”  To defer, evade, ignore, or deny minorities’ demands may only be at the cost of an ultimate and terrible reckoning.

Michael Vickers taught Political Science at University of Ife (now Obafemi Awolowo University) Nigeria, and taught and conducted research at universities in America, Canada and the United Kingdom.  Author of Ethnicity and Sub-Nationalism in Nigeria:  Movement for a Mid-West State (Oxford, 2000);  Phantom Trail:  Discovering Ancient America (New York, 2005); with Ken Post, Structure and Conflict in Nigeria, 1960-66 (London & Madison, 1973); and many articles and reviews; he holds a doctorate in Political Science and West African Studies from the University of Birmingham.  He is Emeritus Director of Parliamentary and Public Affairs, The Hillfield Agency, UK.