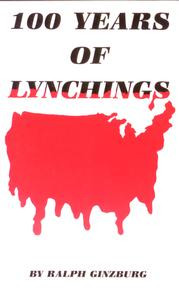 Recent racial violence against Blacks is on the rise. From distant parts of the United States, reports of racial violence fill the daily news. That Blacks are killed in the streets of New York while being beaten and harassed in the hills of Georgia, should come as no surprise. America has a long but seldom discussed history of violence against its Black citizens. The typical American response has been to ignore this history. Unfortunately this further obscures a historical problem which can only be resolved through defensive vigilance and an awareness of the scope and nature of the problem.

Through Ralph Ginzburg's 100 YEARS OF LYNCHINGS, we gain insight and understanding of the magnitude of racial violence. The hidden past is illuminated to rekindle the defensive vigilance of this generation.

First published in 1962, 100 YEARS OF LYNCHINGS, is as relevant today as it was then. It presents the reader with vivid newspaper accounts of a "red record of racial atrocities." It is a simple and straight forward presentation. Lacking narration, the news articles speak for themselves. Through them we witness a history of racial atrocities that we cannot afford to forget. Ginzburg skillfully selected articles from a wide range of papers, large and small, radical and conservative, white and Black. Through them, he has created a documentary of lynchings. The collection of articles which extend into the 1960s provides a sobering view of American history. Few who read the book will remain unaffected by this view.

Ralph Ginzburg (1928-2006) was an experienced journalist, editor, and publisher. He authored several books and worked as a New York City-based, freelance journalist (for Reuters, Associated Press, and most of the dailies in New York City).