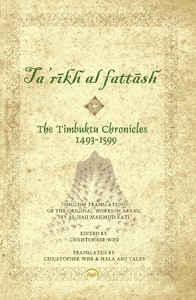 Some five hundred years ago, the Askiya Muhammad founded the Songhay Dynasty of the Askiyas, which flourished for more than a century in Sahelian West Africa.  The Askiya Muhammad administered his kingdom from Gao, Mali, although many of his most loyal followers were located in Timbuktu, Mali.  The Timbuktu based scribe al hajj Mahmud Kati was a close friend of the Askiya Muhammad, who accompanied the famous Songhay leader during his pilgrimage to Mecca.  The Tarikh al fattash is an eyewitness account of the rise and fall of the Songhay Empire, told from Kati’s perspective as a key participant in many of the most important events in the era of the Askiyas.  Wise’s The Timbuktu Chronicles, 1493-1599 is a translation of the Octave Houdas and Maurice Delafosse’s rendition of the Tarikh al fattash, which was compiled from three versions of the text that surfaced in the early twentieth century, and that were edited by Houdas and Delafosse in 1913.  It includes a new introduction by Wise, as well as the original introduction and scholarly notes of Houdas and Delafosse.  Although long valued as the most important historical document of the medieval period, Kati’s chronicle is also a literary achievement that is comparable to the writings of figures like Chaucer, Rabelais, and Montaigne.  Wise’s introduction and study questions accompanying this translation provide contextualizing information for the non-specialist.  The Tarikh al fattash is essential reading for all students of African literature and history.

Christopher Wise deserves both our admiration and gratitude for making available to the wider world this five hundred year old chronicle—the best, the most significant and the most useful on the Songhai empire. The premodern is connected with the modern; old Africa and new Africa are blended; and texts and interpretations are united to understand the past, to teach about the past, allowing us to reflect more profoundly on an era that we continue to hold in awe for its achievements, the endurance of its ideas, the brilliance of its scholars, and the grandeur of its institutions.

The appearance of Mahmud Kati's Tarikh al Fattash in English translation is long overdue.  In the years to come, we may look forward to the appearance of more neglected classics from Timbuktu and elsewhere in West Africa, in both Arabic and Ajami. Wise's new volume, with its very readable translation and helpful introduction, performs an important service for African literary studies.

Associate Professor of Anthropology and Director of the African Language Program, Boston University

Thanks need to be given to Christopher Wise and Haba Abu Taleb for resurrecting Tarikh al-Fattashor The Timbuktu Chronicles, which is now available in English because of their translation. This fifteenth century text is a marvel of literature and history and its availability in this excellent English translation will provide an important new treasure for those who are interested in the history and civilization of Islam.

Professor of Political Science and Sociology

ABOUT THE AUTHOR, EDITOR & TRANSLATORS

Mahmud Kati ibn al hajj al-Mutawakkil Kati was born in Kurmina (Northern Mali), in the year 1468. Kati’s father was a Sephardic Arab Muslim, who migrated to Timbuktu in the era of the Spanish Inquisition.  Kati’s mother was a black African woman of Songhay-Soninke origin. Kati lived most of his adult life in Timbuktu.  He most likely died in 1552, fourteen years after the death of the Askiya Muhammad.

Christopher Wise is Professor of English and Comparative Literature at Western Washington University.  Wise’s previous publications include his translation of Norbert Zongo’s The Parachute Drop (2004) and The Yambo Ouologuem Reader (2008).

Hala Abu Taleb is an assistant professor of American Studies at the University of Jordan. She also teaches courses on American Literature and Cross-cultural Communication to undergraduates in the English Department. Her research interests include identity politics, cultural bridging and aesthetic resistance.