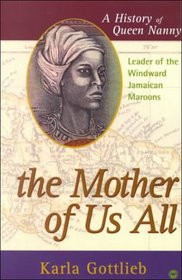 "The Mother of Us All" is an analysis of the history of Queen nanny, the great 18th century leader of the Windward of Eastern Jamaican Maroons. The importance of this great leader's struggle against British colonial empire and its institution of slavery on the island of Jamaica has previously been largely ignored. To correct this gap, oral histories, including myths, legends, songs, ceremonies and local language are analyzed, as well as written texts including legal documents, journals of the era, historical land grants and peace treaties, poems, novels, critical texts, historical texts and children's books.

The Maroons of Jamaica were ex-slaves who had escaped from slave ships and plantations to form viable communities in remote and inaccessible parts of the country. Queen Nanny, warrior, general, spiritual adviser and, some say, messiah to the Maroons, led her people from their base camp of nanny Town in the rugged Blue Mountains of Eastern Jamaica, to repeated victories against the British at the height of their world domination, particularly from 1724 to 1739. Repeatedly, the Maroons were vastly outgunned and outnumbered, with often 500 half-starving Maroons fighting against 5,000 of the best-provisioned and best-armed soldiers of the British Empire. But warfare was only on of the talents. In the area of supernatural and religious interest, or "Science": to the Maroons, Queen Nanny was known as a great healer and extremely powerful obeah woman (holder of secret sacred African knowledge).

The author analyzes the importance of Queen Nanny from cultural, military, historical, and religious points of view. This book marks an attempt to integrate a key figure of New World history into her rightful place as the leader of a critical resistance movement in Jamaica in the first part of the 18th century.

ABOUT THE AUTHOR
KARLA GOTTLIEB is a specialist in ethnographic and feminist studies. She was educated at Yale and San Francisco State Universities. She lives in Miami and recently completed her first novel.