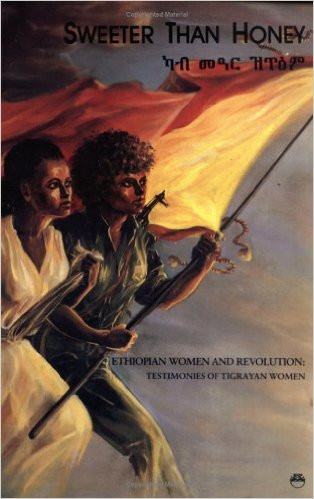 "My revolution is like honey;
she gets sweeter all the time"

Few people in the West know
much about what's happening in
Tigray in northern Ethiopia; in
media there's little more than reports
of famine, poverty and under-development.

But since 1975 the people of Tigray
have been working towards a democratic
society thought a gradual process of revolu-
tion. Led and supported by the Tigray People's
Liberation Front, they are transforming their
lives, despite the impoverishment of the region
and the Ethiopian government's continued military
aggression.

Women are fundamental to these changes: Lemlem
Geseese, one of the first women fighters, tells us:

'Women are not symbolic in the TPLF; they have con-
tributed so much from top to bottom of the struggle. If the
struggle were to continue without women, if that were
possible, then it would only be half a struggle! I am not only
talking about women in the TPLF, but about all the women of Tigray.
They are raising their kids, protecting their grain and protecting their revolution."

The extent to which women's interests are prioritised is an acid test for any society claiming
democracy or undergoing revolutionary development. The stories and testimonies in this let readers
see for themselves what is happening in Tigray. Through the voices of women-farmers and famine-survivors,
military commanders and mechanics—it becomes clear that the revolution is truly "sweeter than honey'!