POWER AND PRESS FREEDOM IN LIBERIA, 1830-1970: The Impact of Globalization and Civil Society on Media-Government Relations, by Carl Patrick Burrowes 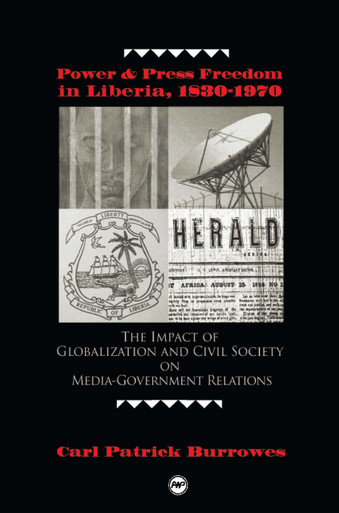 POWER AND PRESS FREEDOM IN LIBERIA, 1830-1970: The Impact of Globalization and Civil Society on Media-Government Relations, by Carl Patrick Burrowes

Power and Press Freedom in Liberia, 1830-1970 tells the rich and sometimes heroic story of the press in Liberia, from 1830, when the first newspaper was established, to 1970, the nadir of government control of the media. Early newspapers were infused with a broad race consciousness, reflected in names like Africas Luminary, the African Watchman, and New Africa, which gave way to a specific nationalism at the turn of the last century, as the curtain of European colonization separated Liberians from the rest of the continent. Initially, newspapers featured biting social commentary and enjoyed wide latitude to criticize officials. But, increased foreign investments in the 1940s brought stringent restrictions and a rise in government ownership of the media.

This book is a pioneering work in Liberian media historyIn a very real sense it is a history of Liberia itself. Burrowes take us back to the founding of the countrys first ever newspaper, The Liberia Herald in 1830, 17 years before Independence, and to lead us through the historical development of the media and of the nation state itself, through 1970. In the process, he has given us a rich and vibrant introspection into the history of our country and its press as no other Liberian author has done. He records the repression and persecution which journalists experienced beginning in the 1940s and continuing, with even tragic results in later years. Burrowes has given us an invaluable and in depth lesson in Liberian history and media.

ABOUT THE AUTHOR
CARL PATRICK BURROWES is Chairperson of the Department of Communication Studies, Morgan State University, Baltimore. From 1995 to 1998, he was the Carter G. Woodson Distinguished Professor of Journalism at Marshall University, where he co-founded the Center for the Study of Ethnicity and Gender in Appalachia, with funding from the Rockefeller Foundation Humanities Division. He also served on the faculty at California State University, Fullerton (1990-1995), and taught journalism at the University of Liberia (1979-1980). He worked as correspondent for West Africa and New African magazines (both of London) in the 1980s. He is co-author of the Historical Dictionary of Liberia (2000) and has published commentaries, articles and other writings in The New York Times and other newspapers, as well as The Crisis, Essence and Emerge magazines.