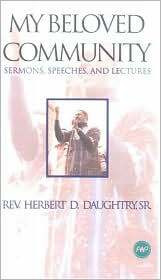 Rev. Herbert D. Daughtry, Sr., is the well-known activist minister and author of No Monopoly on Suffering: Blacks and Jews in Crown Heights--and Elsewhere (AWP 1997). From his childhood in segregated Georgia to his current ministry, Daughtry has intellectually and practically confronted the challenges of deepening faith in a personal God and expressing that faith in political, historical, and collective ways. How can one simultaneously love one's people and--in trying times--love the world?

The sermons, speeches, and lectures collected in this volume, composed over a number of years, address, among related issues: Merging race consciousness with religious conviction, the function of Christianity in a Black community often viewing it as the white man's "trick bag" to maintain Black subservience and blindness, and the Africanness of Christianity, and, yet, its universality.

The book is divided into four sections: a Christological statement, the theology of liberation, a historical-contemporary statement on the Black Church and Preacher, and "A Message to My People." In aggregate, these writings constitute a timely and indispensable statement of muscular Christianity in a race-conscious setting. Only Rev. Daughtry could have composed and delivered them!

"My Beloved Community is a powerful witness to the relationship between African-American communities of faith and the liberating gospel of Jesus Christ. For over thirty years, I have been impressed by Rev. Herbert Daughtry's commitment to empowering the black community of New York City, particularly through his work with the House of the Lord Church."
-James H. Cone, Briggs Distinguished Professor of Theology, Union Theological Seminary

ABOUT THE AUTHOR
Reverend Herbert D. Daughtry, Sr., is the National Presiding Minister of the House of the Lord Churches and the Pastor of the Brooklyn, New York Assembly. He is the author of No Monopoly on Suffering: Blacks and Jews in Crown Heights and Elsewhere (AWP 1997).