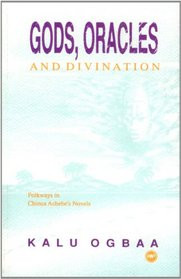 "A cultural exegesis of the four novels of Chinua Acheb. Focus of exegis is the 'folkways,' the inclusive category of verbal performances peculiar to the world of Achebe's novels: cosmology, traditional religion; gods, divination; names; rituals, ceremonies; proverbs; tales; songs and chants; and language. Dr. Kalu Ogbaa uses a personal reading of the novels, based on his own experience as a member of Achebe's community, with relatively little dependence on printed sources. Overall, he succeeds in bringing a fresh incisive interpretation to many individual passages and cruxes. His originality makes the book a significant contribution to Achebe studies." -Robert Wien