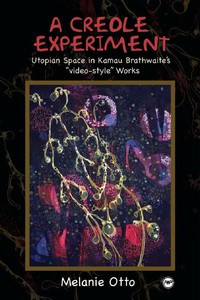 Kamau Brathwaite’s writing covers a whole range of creative expressions. The most distinctive, known as “Sycorax video style,” involves an experiment with different font sizes and layouts that not only challenges the limits of the text, but also reveals a sustained engagement with the political reality of contemporary West Indian life. Brathwaite’s “creole cosmos” expresses both a global “collision of cultures” and a utopian vision for which the Caribbean is presented as a model. In this sense, Brathwaite’s work engages the current debates about the global dimension of creoleness and creolization while critiquing them at the same time.

In A Creole Experiment, Melanie Otto examines the utopian aspect of Brathwaite’s major “video-style” works while employing the concepts of Heimat (homeland) and “concrete utopia,” which were developed by philosopher Ernst Bloch in The Principle of Hope.  She also focuses on Brathwaite’s interrogation and reinterpretation of the conventions of magical realism. Unlike mainstream Latin American magical realism, Brathwaite’s work is radical in both form and content, developing a distinctly creole aesthetic.  In addition, Otto notes that Brathwaite’s vision of a “creole cosmos” does not refer to an ideal place. Instead, it reveals the tangibility of an often dismal day-to-day existence.

In this well-researched, engaging study, Otto convincingly argues that Braithwaite seeks to deliver ways of connecting the act of writing with a sense of place and with the lived reality of the Caribbean, in order to create and recreate that reality.

MELANIE OTTO is lecturer in English at Trinity College, Dublin, where she teaches in the areas of postcolonial literatures, women’s writing, and literatures of the Americas. She has published articles on Caribbean writing in Utopian Studies and The Arts Journal. She also contributed a chapter on the Caribbean to The Routledge Companion to Postcolonial Studies (2007), edited by John McLeod.