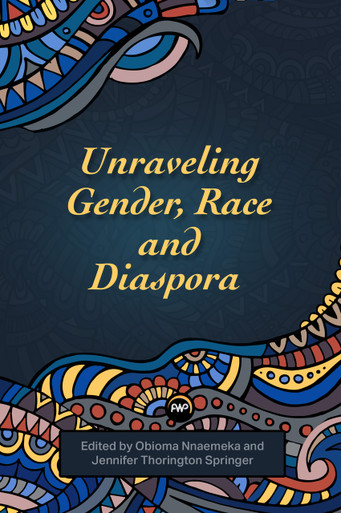 This anthology, Unraveling Gender, Race and Diaspora, brings together academicians and public intellectuals in a vigorous conversation that reimagines and expands the fields of Africana, postcolonial, feminist, gender and women’s studies.  In its theorizing of the intersections of difference—gender, race, class, culture and location—within Africa and between Africa and its Diasporas, the volume offers a more global representation of the cross cultural experiences of diasporic subjects.  The volume offers critical re-assessments of dominant discourses of the diaspora and formations of the subject identities within it. By emphasizing the relevance of intra-diasporic conversations in film, literature and oral tradition, the volume comprehensively engages core concerns in black diasporic communities—memory (remembering and forgetting), space/location, time, human agency, and shifting exigencies.

“A riveting collection of essays on the shifting constructions of women’s lives and the negotiation of contested and contesting identities in Africa and its Diasporas.”
--Naomi Nkealah, University of South Africa, Pretoria, South Africa

ABOUT THE EDITORS
OBIOMA NNAEMEKA, Chancellor’s Professor at Indiana University School of Liberal Arts, is a prominent scholar of African, French and Women’s Studies.  She is the author of many books and scholarly papers.  Professor Nnaemeka is the President of the Association of African Women Scholars (AAWS). She has published extensively in the following areas: development, women/gender studies, literary studies, human rights, war and conflict resolution, and African/African diaspora studies.