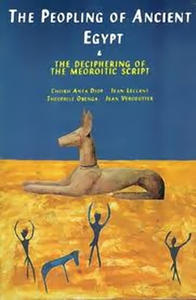 This book is a concise report of the 1974 Cairo conference and contains the arguments concerning the ethnic, linguistic and cultural composition of the ancient Egyptians as well as the deciphering of the meroitic script. The debates are fierce and extensive on the question of the racial identity of the ancient Egyptians but this volume does show that the despite the opposing camps' perspectives, the dispassionate summary leaves no doubt as to the scientific rigor that was at the service of the African contribution. This volume therefore elucidates the oppositional stances delineated by both tendencies and exposes the weaknesses of the unrevised Indo-European model.

From the Conclusion of the Report: Jean Devisse

Although the preparatory working paper sent out by Unesco gave particulars of what was desired, not all participants had prepared communications comparable with the painstakingly researched contributions of Professors Cheikh Anta Diop and Obenga. There was consequently real lack of balance in the discussions...The symposium also enabled specialists who had never previously had the opportunity of comparing and contrasting their points of view to discover other approaches to problems, other sources of information and other lines of research than those to which they were accustomed.