THE OBAMA PHENOMENON CHANGE WE CAN! Essays and Poetry, by Black Critics and Creative Artists, Edited by Femi Ojo-Ade 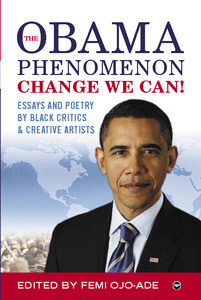 THE OBAMA PHENOMENON CHANGE WE CAN! Essays and Poetry, by Black Critics and Creative Artists, Edited by Femi Ojo-Ade

Edited by internationally recognized scholar on black literatures and cultures, Femi Ojo-Ade, this volume brings together a mixture of young intellectuals and seasoned scholars from Africa and its Diaspora to address various themes of the Obama phenomenon, all from an Afro-oriented perspective. Obama, even in modern, millennial America, remains black and African, notwithstanding his mainstream pedigree as a child reared by a single white mother and an adult educated in legendary Ivy-League Harvard. His affiliation to black is a choice; he has made it a point of attitude and action to be at once America’s president and a beacon of achievement for his black and African people.

The reverberations of Obamamania in France, racist in spite of her reputation as the center of European liberalism. A riveting comparative analysis of the American and Brazilian destinies of blacks. A spiritual expose of the Obama phenomenon as the work of a mysterious and mystical force propelling the man to the highest ground. A proposal to use Obama’s call for change as anchor for improving America’s public education system where blacks remain on the outside looking in. An exploration and explication of the term, African, through the complexities of Obama’s character in a nation where the metanarratives of race stand as impediment against postcolonial harmony and success. An in-depth analysis of Obama’s autobiography revealing the essentials of a black’s movement towards the fulfillment of an impossible dream. Such are the themes of the fifteen chapters of this thought-provoking and cautionary collection that concludes with a poem telling the tale of the harrowing history and heritage of Africans of all nations. The Obama Phenomenon Change We Can! far from being a neologism coined from what some would dismiss as Obama’s political jingoism, is an affirmation of potential power, a call-out to people of all races and cultures to work together for the just cause of human progress.

Ojo-Ade’s singular collection offers readers the testimonies of writers who seek to both celebrate and humanize Barack Obama; it promises to become a critical companion in ongoing efforts to contextualize the Obama phenomenon in discussions of the relevance of history, nation, trans-nationalism, and the meanings of race.
—Anani Dzidzienyo,
Africana Studies/Portuguese and Brazilian Studies, Brown University, USA

Here diverse Afrikan voices, from the continent and abroad, unite for an evaluation of one of the most significant phenomena in the world. The result is a text which illustrates, through its many perspectives, a character who is himself remarkably multi-faceted. … A text that is urgent, necessary and therefore welcome. Afrikan people must continue to tell Afrikan stories.
—Kimani S.K. Nehusi,
Egyptologist, Combined Honors Leader, University of East London, UK

Femi Ojo-Ade has scored another first with this exceptional collection of theoretical and analytical insights into the Obama Phenomena. I have read through every essay and poem, and for a scholar and teacher of African and African Diaspora Studies, this book in every chapter propels new ideas and provokes unique views on an Obama character rooted in twenty-first century African-centered paradigms.
—Abdul-Rasheed Na’Allah,
Author of African Discourse (Routledge, 2010), and Vice-Chancellor and Chief Executive, Kwara State University, Nigeria

ABOUT THE EDITOR
Femi Ojo-Ade is Professor Emeritus of St. Mary’s College of Maryland. A prolific writer and widely traveled scholar, Ojo-Ade has authored over twenty creative and critical books, some of which have been translated into Brazilian Portuguese. His most recently published work was Aimé Césaire’s African Theater: Of Poets, Prophets, and Politicians (Africa World Press, 2010).