'THE FREEDOM OF THE WRITER' (Tigrinya text) And Other Selected Literary and Cultural Essays, by Ghirmai Negash 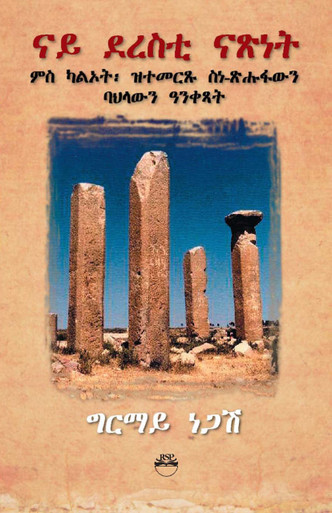 'THE FREEDOM OF THE WRITER' (Tigrinya text) And Other Selected Literary and Cultural Essays, by Ghirmai Negash

In this richly researched and lucidly written collection of essays, The Freedom of the Writer and Other Selected Literary and Cultural Essays, Ghirmai Negash provides solid analysis and information on some of the salient aspects of Eritrean literature and culture. Chapter one deals with the Freedom of the Writer. Written in 1992, it presents a penetrating examination of the state of Eritrean literature and authors under colonial regimes, but also anticipates what could go wrong in post-independence Eritrea. Chapter 2 discusses the role of institutions in the development of arts, and chapters 3 and 5 examine the role of oral tradition, and particularly of oral poetry, in the societys culture and literature. Chapter 4 deals with the marginalized history and postcoloniality of Tigrinya literature. Chapter 6 tells how the novel Deqwan Tebereh, by Eritreas foremost, contemporary writer Beyene Haile, sees the role of the intellectual and the artist in the construction of a postcolonial African nation and society. The last chapter offers a proposed model for a Standardized Punctuation System for Modern Tigrinya.

ABOUT THE AUTHOR
Ghirmai Negash is Assistant Director of the Institute for the African Child, African Studies Program, Ohio University, where he teaches African literature, and African languages. Formerly, he worked at Leiden University, the Netherlands, and was the founder-chair of the Dept. of Eritrean Languages and Literature of the University of Asmara, Eritrea (2001-2005). He is the author of A History of Tigirnya Literature in Eritrea. The Oral and the Written 1895-1991 (1999), Who Needs a Story? Contemporary Eritrean Poetry in Tigrinya, Tigre, and Arabic (with Cantalupo, 2005), and numerous articles on African literatures, and orature.