THE BLIND MEN AND THE ELEPHANT: And Other Essays in Biographical Criticism, by Bernth Lindfors, HARDCOVER 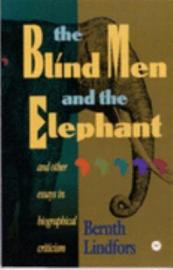 THE BLIND MEN AND THE ELEPHANT: And Other Essays in Biographical Criticism, by Bernth Lindfors, HARDCOVER

In an intellectual climate dominated by formalistic theoretical concerns, biographical criticism may seem an unfashionable mode of academic discourse, but it is sorely needed when writers and readers hail from different countries. A text may be so completely conditioned by its indigenous environment that it cannot be adequately grasped or appreciated without some knowledge of its creator and the circumstances that prompted its creation. Biographical criticism, by studying the human face behind the text, may thus assist us in the larger task of reading our fellow man.