RAS ALULA AND THE SCRAMBLE FOR AFRICA by Haggai Erlich (HARDCOVER) 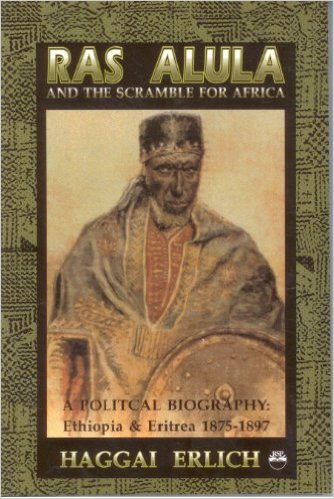 RAS ALULA AND THE SCRAMBLE FOR AFRICA by Haggai Erlich (HARDCOVER)

Ras Alula was one of the big men or Telek Saw who played a prominent role in the making of modern Ethiopia. He was famous enough to be lamented by a British historian as, "the greatest leader that Abyssinia has produced since the death of the emperor Theodore in 1868." As remembered by the Ethiopians and reflected in their literature, "The famous and brave Ras Alula"was a great warrior whose valor and military skill contributed greatly to various important victories over Ethiopia's enemies. Both Italians and Ethiopians regarded Alula as the most persistent opponent of Italian involvement in Ethiopian affairs.

Professor Haggai Erlich's Ras Alula and the Scramble for Africa: A Political Biography has all the ingredients of personal drama. The life and times of this great Ethiopian political figure of the 19th century in its vicissitudes reflects some of the major issues in his period. The revival of Tigrean hegemony over Ethiopia; the military victories which guaranteed the survival Ethiopia's independence; the rise of Menelik II and the great national victory near Adwa were all milestones in the Ras's life. Simultaneously, the story of this son of a peasant—his successes and failures, his ambitions and weaknesses, his achievements and mistakes—was all an important factor in those developments. This biography makes a significant contribution in the study of an important chapter in the history of Ethiopia and Eritrea through the experience of a person who was not the head of the state. As such, it is also an insightful analysis of late 19th century Ethiopian sociopolitics.

"Erlich surveys skillfully, and in considerable detail, two of the most eventful decades of Ethiopia's diplomatic history, 1875-97...[He] has unearthed a considerable mass of detail on the Ras's life for which scholars will be grateful."

Haggai Erlich, Professor of Middle Eastern and African History at Tel Aviv University, was born in Israel, and received his PhD. from the University of London, SOAS, in 1973. He is the author of seven books, and has written extensively in various scholarly journals on Ethiopian and Middle East history and politics. his current research in progress is titled The Nile—Myth and History.