PERSON, DIVINITY AND NATURE: A Modern View of the Person and the Cosmos in African Thought, by Chukwunyere Kamalu 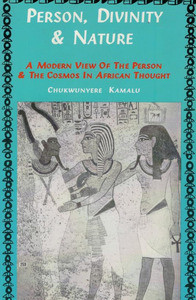 PERSON, DIVINITY AND NATURE: A Modern View of the Person and the Cosmos in African Thought, by Chukwunyere Kamalu

This systematic study of African belief aims to give the reader more than a scramble of disconnected myths. Africa is viewed as a cultural unity in a contrast to anthropological works which emphasise the idea of the diversity of African culture to the extreme. Th e result of this has been that ancient and traditional African worldviews/belief systems as a whole are seen as historically and geographically unconnected. This is more a personal than a rigid academic view of African systems of thought as a corpus of ideas having some kind of connection. A connection based on certain common truths, they refer to the experiences of man/woman as beings who are a meaningful part of a mysterious universe.

In eight chapters, the author looks at the questions of Rites of Passage, The Person as Multiple Selves, Number, Destiny and Divination, Complementary Opposites in Ethics and Morals, Ancient & Traditional Accounts of the Beginning, Common Elements in African Cosmology, The Sumpreme Being, The Divinities and Spirit-Forces and Earth & Land in AFrican Thought and Practice. These chapters are detailed examples of analysis and interpretation, as well as representative personal experience, in the articulation and expression of African cosmology. This work opens up new understanding of African cosmology in its presentation of the holistic unit of material and immaterial, visible and invisible--all are understood to be a part of an African worldview.

AUTHOR
CHUKWUNYERE KAMALU was born in Nigeria and was brought up and educated in England: Cranfield College (Ph. D.). University of Birmingham (M.Sx.), University of Wales (B. Sc.); since childhood he studied at boarding school to A'Levels. He is also a professional musician and composer and teaches Black Studies and Social Psychology at the University of Reading.