OUR BLACK SEMINARIANS & BLACK CLERGY WITHOUT BLACK THEOLOGY, by Yosef A.A. ben-Jochannan, with an Introduction by John Henrik Clarke 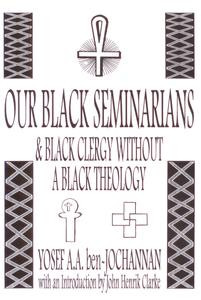 OUR BLACK SEMINARIANS & BLACK CLERGY WITHOUT BLACK THEOLOGY, by Yosef A.A. ben-Jochannan, with an Introduction by John Henrik Clarke

"...With colonization came the dismantling of traditional African belief systems. Influenced by the European propaganda mills, some Africans began to believe that they had produced nothing of worth. This is the origin of Black seminarians who could not find a Black theology. In Black Seminarians, ben-Jochannan outlines sources of Black theology before Judaism, Christianity, and Islam. It's important for us to know that the ideas, practices, and concepts that went into the makinf of Judaism, Christianity, and Islam were already old in Africa before Europe was born. Black Seminarians marks an important first step in our journey to reclaim our spiritual heritage." - From the introduction

Yosef A. A. ben-Jochannan is a master teacher with a forceful command of ancient and contemporary history. He uses wit, humor, and common sense to accent history and expose historical distortions. Dr. Ben has taught on the faculty of colleges and universities in the United States and abroad. His most recent assignment was as Senior Lecturer, Faculty of Languages, Al Azhar University (Arab Republic of Egypt). Prior to that, he served as Adjunct Professor of History and Egyptology at Cornell University's Africana Studies Research Center.