OF WAR AND WOMEN, OPPRESSION AND OPTIMISM: New Essays on the African Novel, by Eustace Palmer 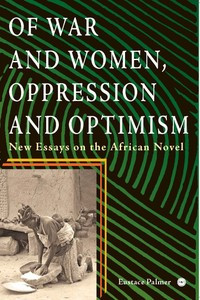 OF WAR AND WOMEN, OPPRESSION AND OPTIMISM: New Essays on the African Novel, by Eustace Palmer

Eustace Palmers Of War and Women, Oppression and Optimism is a supplement to his two earlier works on the African novelAn Introduction to the African Novel and The Growth of the African Novel. Palmer undertakes a detailed critical assessment of key novels that he feels are typical of the main trends. Starting with an introduction that discusses in frank and characteristically lucid terms the advisability of applying Western theoretical concepts, or even using the terminology developed in Western academia, for the analysis of the African novel, he goes on to a consideration of a key trendthe war novel. His analyses of Ikes Sunset at Dawn, Okpewhos The Last Duty , and Saro-Wiwas Sozaboy are done against the background of the Nigerian civil war, showing the disastrous impact of that war on society and particularly on women, bringing out the differing attitudes of the various writers, and considering the artistic innovations they use to communicate their insights.

Palmer then on African women novelists. A detailed and absorbing examination of African feminist theory leads to a discussion of novels by Bessie Head, Buchi Emecheta, Mariama Ba, Nawal El Saadawi, and Tsitsi Dangerembga, showing the differing ways in which these novelists explore the condition of the African woman and considering the established as well as new narrative conventions they use to give voice to their concerns.

Palmer is particularly impressive in the section where he deals with those novelists, established as well as recent, who deal with social comment, a perennial concern of the African novel and one that is even manifest today. His analyses of Achebes Anthills of the Savannah,, Okris The Famished Road, Cheney-Cokers The Last Harmattan of Alusine Dunbar, and Benjamin Kwakyes The Sun By Night are particularly illuminating as he shows how these novelists bend the novel form or use new techniques to articulate their own perceptions of recent history. Finally, Palmer asserts that his native Sierra Leone, which lagged behind other West African countries in literary production, has at last found its novelistic voice, and he goes on to consider the contributions of new Sierra Leonean novelists like Yema Lucilda Hunter, Prince Dowu Palmer, Alasan Mansaray, and J. Sorie Conteh. In all this, he uses a clear and accessible style, places the novels in their contexts, and demonstrates his humanistic concern.

ABOUT THE AUTHOR
Eustace Palmer, a native Sierra Leonean, taught for several years at Fourah Bay College, the University of Sierra Leone, where he was Professor of English, Chair of the English Department, Dean of the Faculty (School) of Arts, and Dean of Graduate Studies. One of the pioneer critics of African literature, he has also published two works on the African novelAn Introduction to the African Novel and The Growth of the African Novel as well as scores of articles on that genre. He was Associate Editor, with Professor Eldred Jones, of African Literature Today. He teaches at Georgia College & State University, where he is Professor of English and Coordinator of Africana Studies.