NO EASY ROW FOR A RUSSIAN HOE: Ideology and Pragmatism in Nigerian-Soviet Relations, 1960-1991, by Maxim Matusevich 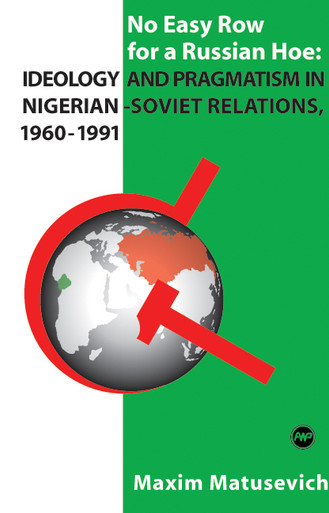 NO EASY ROW FOR A RUSSIAN HOE: Ideology and Pragmatism in Nigerian-Soviet Relations, 1960-1991, by Maxim Matusevich

By exploring the dynamics of the relationship between Nigeria and the USSR from the time of Nigeria's independence in 1960 to the collapse of the Soviet Union in 1991, this book presents a revisionist examination of the important yet often misinterpreted interplay between ideology and pragmatism in Third World-superpower interaction.

This useful books focus on Africa brings to light for the first time a number of important behind-the-scenes developments on both sides and "in the shadow" of the Iron Curtain. Matusevich's fresh analysis of the Cold War interaction between Nigeria and the Soviet Union has significant implications for reassessing the current international scene.

Here is a book we have awaited for so long to disentangle the cobwebs covering our understanding of Nigerian-Soviet relations during the Cold War. Matusevich has adequately revealed the complicated history that we need to know, the actors and interests that we must consider, and the betrayal of ideologies that frustrate policies and dialogue. Generous and prodigious in data, engaging in its presentation and cogent in laying out its arguments, No Easy Row challenges a corpus of ideas on the Cold War and represents an outstanding achievement worthy of praise, attention, and emulation.

ABOUT THE AUTHOR
MAXIM MATUSEVICH is Assistant Professor of History at Seton Hall University. An award-winning journalist from St. Petersburg, Russia, he received his Ph.D. in African History from the University of Illinois at Urbana-Champaign. He is the author of Africa in Russia, Russia in Africa: Three Centuries of Encounters (AWP).