JESUS AND UBUNTU: Exploring the Social Impact of Christianity in Africa, Edited by Mwenda Ntarangwi, HARDCOVER 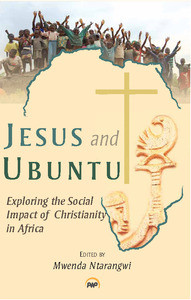 JESUS AND UBUNTU: Exploring the Social Impact of Christianity in Africa, Edited by Mwenda Ntarangwi, HARDCOVER

As African Christianity takes a commanding position in global Christianity due to its exponential growth in the last few decades, questions abound of the relationship such growth has with continued decline in most development indicators in the continent. Jesus and Ubuntu assesses the social role played by Christianity in contemporary Africa amid the growing awareness of Africa’s social, economic, and political challenges.

In vibrant detail informed by on-the-ground experiences in East, South, and West Africa contributors to this volume lay out multiple perspectives, experiences, and challenges facing African Christians as they contend with everyday challenges of living out faith while aggressively navigating their national and local realities. From the clear correlation between initial goals of the Pan African movement and those of a good community espoused in Christianity to the challenges of short-term missions and the joys of compassionate literacy teaching in a post-war context, this volume provides a much needed on-the-ground account of African Christianity today.

Contributors also assess the impact of notions of modernity on African interactions with faith and development and how the everyday struggles of survival impede on citizens’ ability to participate in church-sponsored civic education program. They examine the rise of charismatic theology in mainline churches and the public role of Pentecostals in participatory politics that in turn shapes national discourses on morality.

MWENDA NTARANGWI is Associate Professor of Anthropology and Executive Director, Office of Global Initiatives at Indiana Wesleyan University. He is the author of Reversed Gaze: An African Ethnography of American Anthropology, East African Hip Hop: Youth Culture and Globalization and Gender, Performance, and Identity: Understanding Swahili Cultural Realities through Songs.