IDENTITY JILTED OR REIMAGINING IDENTITY? The Divergent Paths of the Eritrean and Tigrayan Nationalist Struggles, by Alemseged Abbay, HARDCOVER 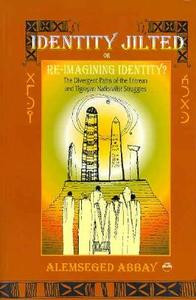 IDENTITY JILTED OR REIMAGINING IDENTITY? The Divergent Paths of the Eritrean and Tigrayan Nationalist Struggles, by Alemseged Abbay, HARDCOVER

In this bold study of modern ethno-regional nationalism, the author examines the divergent paths taken by the nationalist insurgencies in Tigray and Eritrea. The author argues that Tigrayans, south of the Mereb River, and Kebessa (highlands) Eritreans, north of the Mereb, are ethnically one people, tied by common history, political economy, myth, language and religion. Both fought against an enemy, an oppressive Amhara ethnic state, for a period of seventeen and thirty years respectively. In the process of the armed struggle, however, each evolved separate political identities and, after jointly marching to military victory in 1991, they followed separate political paths-Eritreans created the newest state in Africa and Tigrayans remained within the Ethiopian body politic.

The three rational actors in the region-The EPLF, TPLF and the Dergue, all of whom vied for a share of the political pie-pursued divergent policies. The author advances a highly plausible thesis to explain the Re-Imagining of Identity. Whenever available, as in Tigray, the primordial past serves a solid foundation for the social construction of identity. To say that the primordial past has a center stage in en ethno-regional conflict is not to deny the socially constructed nature of identity. Nor does it imply that the primordial past condition sine qua non for identity construction. However, mobilization was not absolutely rosy even in Tigray, because peasants could not conceptualize abstract terms such as "nationalism," "hegemony," "secession," "self-determination," etc. It was the Ethiopian state's genocidal-like policy that heralded a turning point in the process of mobilization. Once peasants were convinced that all that the state was doing was "draining the sea to kill the fish," mobilization became a foregone conclusion. Mobilization, thus, preceded identification. Victory, too, came prior to identification, giving political entrepreneurs a free hand to construct identity the way they saw fit.

ABOUT THE AUTHOR
ALEMSEGED ABBAY was educated at Addis Ababa University (Ethiopia) and the University of California at Berkeley. Currently, he is a post-doctoral fellow at the Institute of International Studies at U.C. Berkeley.