COMES THE VOYAGER AT LAST: A Tale of Return to Africa, by Kofi Nyidevu Awoonor 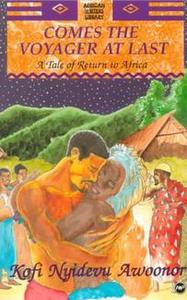 COMES THE VOYAGER AT LAST: A Tale of Return to Africa, by Kofi Nyidevu Awoonor

Comes the Voyager At Last is a tale told in poetry and prose. It is a haunting tale of slaver, the forced journey of the African tot he New World and his subsequent return tot he native land. Like Awoonor's first novel This Earth my Brother, Comes the Voyager At Last is a work of mythic and consciousness, and affirmation of the life forces of love and humanity in the face of the devastating forces of destruction characterized here in the historical racism that oppressed and continues to oppress black people both on the continent and in the diaspora. The mythic journey of the protagonist ends on the African soil, in the miracle of love, in the affirmation of the black man's ultimate and enduring humanity.

ABOUT THE POET
KOFI NYDEVU AWOONOR was born in Asiyo division of Wheta in eastern Ghana. He was educated int he Catholic and Presbyterian Primary Schools of Dzodze and Keta, and later at the Zion College, Anloga and Achimota School. He holds degrees from the Universities of Ghana and London, and the State University of New York. he was professor in English and Comparative Literature in SUNY at Stony Brook, and professor of Literature at the University of Cape Coast, Ghana. Ambassador Awoonor is currently Ghana's representative to the United Nations in New York.