BLACK ORWELL: Essays on the Scholarship of Ali A. Mazrui Edited by Seifudein Adem and Kimani Njogu, eds.(HARDCOVER) 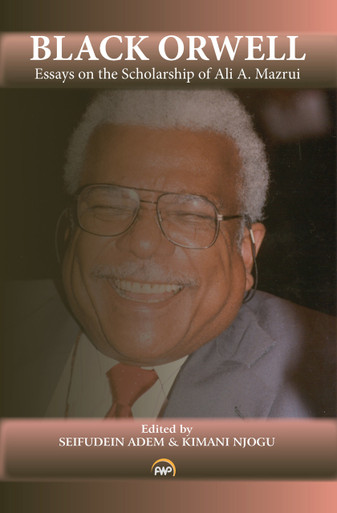 BLACK ORWELL: Essays on the Scholarship of Ali A. Mazrui Edited by Seifudein Adem and Kimani Njogu, eds.(HARDCOVER)

In 2006 Ali A. Mazrui wrote an essay titled “Black Boswell: A Biographer’s Pilgrimage”. It was a tribute to Omari Kokole (1954-1996) who, by the time of his death, was serving as the Associate Director of Mazrui’s Institute of Global Cultural Studies at Binghamton University, New York. Kokole was also writing Ali Mazrui’s biography at the time. It was this fact which prompted Mazrui to suggest that Kokole was playing Africa’s James Boswell to Mazrui’s Samuel Johnson. Unfortunately, the “Black Boswell” project, which had showed so much promise, was never realized due to Kokole’s sudden death. It is this simple observation as well as the fact that Mazrui had from time to time said there was a frustrated novelist in him which, in turn, partly inspired us to title this book Black Orwell: Essays on the Scholarship of Ali A. Mazrui. Is there a sense in which Ali Mazrui could be regarded as the George Orwell of Africa? Some of the authors of the essays in this book seek to provide tentative answers.

With his superb mastery of the language of Shakespeare and English literature, Ali A. Mazrui used his creative imagination to enhance political analysis on subjects as diverse as African politics, globalization and culture, gender and education, North-South relations, and international politics generally. It was due to his superb intellect and great communication skills that he was selected in 2005 by reputable magazines as one of the 100 public intellectuals in the world. Seifudein Adem and Kimani Njogu are to be congratulated for the high quality of the essays they have included in this book on Mazrui’s scholarship.
—Georges Nzongola-Ntalaja,Professor of African and Global Studies,University of North Carolina at Chapel Hill

This volume, with essays from eminent scholars and activists, captures the real essence of this complex and brilliant intellectual, Ali A. Mazrui. It lays out some of his more memorable thoughts and actions related to issues ranging from the heritage of African peoples to social inequality in this era of globalization. The collection also highlights Mazrui’s special ability to use his remarkable literary and debating skills to critique not only the politics of Africa but also trends in world politics.
—Edmond J. Keller,Research Professor,Department of Political Science,University of California-Los Angeles

ABOUT THE EDITORS
SEIFUDEIN ADEM is the former Research Associate Professor and Associate Director of the Institute of Global Cultural Studies at Binghamton University, New York, where he also served as a full-time faculty member from 2006 to 2016. He is currently a Research Fellow at Goethe University Frankfurt in Germany.
KIMANI NJOGU was trained at Kenyatta College, the University of Nairobi and Yale University where he received a Ph. D. in linguistics in 1993. He is an editor, playwright, theorist and linguist.