BAGHDAD BLUES: The Revolution that Brought Saddam Hussein to Power, by Sam Greenlee 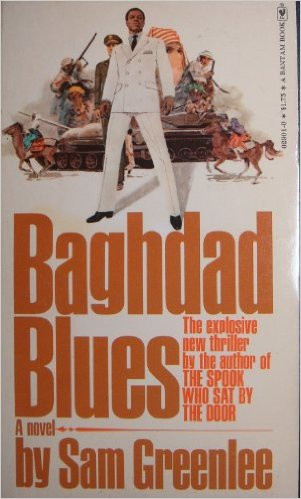 BAGHDAD BLUES: The Revolution that Brought Saddam Hussein to Power, by Sam Greenlee

Baghdad Blues is set against the background of the Iraqi revolution of July 14, 1958, from which Saddam Hussein has emerged and in which he was one of the conspirators. Baghdad was my post in the Foreign Service and I was awarded the Agency's Meritorious Service Award for bravery, as depicted in the book.

Baghdad is a city festering with Arabs protesting the corrupt royalist regime. Dave Burrell is a young recruit officer in he U.S. Information Bureau who admires the rebels and secretly supports their views. His white colleagues, champions of the Iraqi government, are too busy drinking martinis and being "liberal" to care. When the revolution erupts, the U.S. embassy is shocked. The king it supports is shot to death. The palace is destroyed. The entire city of Baghdad is transformed into a ravaged arena of political chaos and violence. And Burrell is caught in the bloody middle.