ARROWS AND THE BOW: Poems, by Ladu Jada Gubek, HARDCOVER 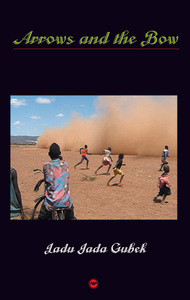 ARROWS AND THE BOW: Poems, by Ladu Jada Gubek, HARDCOVER

“The integrity, sensibility, courage, and delicate balance with which Ladu Jada Gubek draws the rich history and culture [of Africa] together is moving. He brings a refreshing new voice to African and African Diaspora literature and knowledge in this emergent “post-‘postcolonial’” genre…. In this instance, it draws from Ladu’s knowledge and insights of the Sudan, of being blind, of exile (in the United States), of being Southern Sudanese, male, black, and from a Christian culture. Here the universal merges with the particular and vice versa, signaling their interdependent force on collective and individual aspirations, identity, will, subjectivity, and agency such as in the poem ‘Juba Na bari.’”

“If anyone ever wondered about the resilience of the African population of the Southern Sudan, Arrows and the Bow effectively offers an answer. The African people’s resilience lies deep in their culture, which develops independently from any other discipline in life. Neither Christianity nor Islam can influence them to abandon many of their traditions and cultures with ease. Even their traditional religions, which are part of those cultural practices, operate within the peripheries of the deity, without interfering with the general societal cultural order…through Ladu Jada Gubek, we are looking at a person who admires a way of life and has an inborn admiration for that way.

ABOUT THE AUTHOR
LADU JADA GUBEK, a civil rights leader, a teacher, a talented public speaker, a poet, and a playwright. Born on March 15, 1974 in Juba, Sudan, Gubek has been a freedom fighter since he lost his sight from measles, which almost took his life at the age of ten. He is the President of the Southern Sudanese Equatorian Community of Minnesota and in the leadership of the National Association of Blind Students.