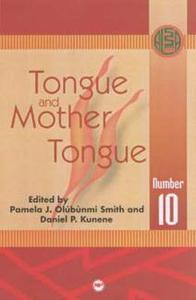 Tongue and Mother Tongue is takes on two compelling challenges: the language question and the place and role of the mother tongue in African literature. This collection is the culmination of the fierce, decades-old debates on the question of African literature and its criticism. The fourteen essays, which range from a variety of critical and theoretical perspectives, have been organized in to five thematic categories whose sequence should be experienced as a continuous dialogue rather than a collection of discrete statements:

Five essays engage the more theoretical aspects of the language question and examine whether or not African writers should write in African languages. The ideological implications of each side of this debate are also explored in these essays.

Two essays examine scholarship and the critical analysis of mother-tongue African literature and demonstrate the "respectability and legitimacy" of the creative and scholarly work being done in the field, as in the example of Yoruba metalanguage and literature.

ABOUT THE EDITORS
PAMELA J. OLUBUNMI SMITH is Associate Professor of English and Humanities in the Goodrich Scholarship Program at the University of Nebraska of Wisconsin, Madison.

DANIEL P. KUNENE is Professor of African languages and Literature at the University of Wisconsin, Madison.