AGAINST ALL ODDS, by Dan Connell (HARDCOVER) 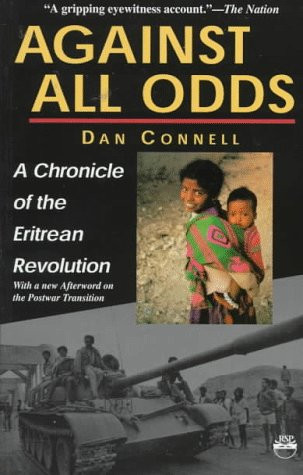 AGAINST ALL ODDS, by Dan Connell (HARDCOVER)

An inspiring story of courage, dedication, achievement and hope with important lessons to teach" -Noam Chomsky

"No one wanting to have and to test reliable opinions about Africa today is going to be able to ignore Against All Odds." -Basil Davidson, Middle East Report

Against All Odds is the firsthand account of Eritrea's epic 30-year struggle for political independence and social justice. With almost no outside support, Eritrean nationalists brought successive U.S.- and Soviet-backed Ethiopian governments to their knees. At the same time, they worked to liberate women, workers and peasant farmers from centuries of grinding poverty, chronic hunger and numbing oppression. Connell argues that it was the blending of social revolution with political objectives that enabled this uniquely self-reliant liberation front to weld Eritrea's fractious society-- half Christian, half Muslim, from nine ethnic groups-- into one of the most remarkable fighting forces in modern history. In a new Afterword, he describes their efforts to translate wartime values and experience into sustainable strategies for developing the new country.

ABOUT THE AUTHOR
Dan Connell has covered Eritrea for the BBC, Reuters, The Boston Globe, The Christian Science Monitor (New York) and other print and broadcast media in North America and Europe. The founder and former director of Grassroots International, Connell now divides his time between teaching, writing and public speaking on democracy and social justice in Third World societies. He and his wife, photographer Debbie Hird, live in Gloucester, Massachusettes.