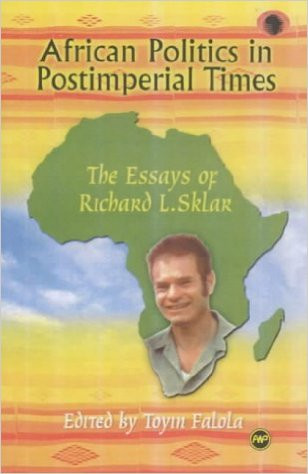 The essays in this valuable collection attest to the fact that throughout his enormously productive career as a scholar, Richard L. Sklar has been at the intellectual forefront of major political and social developments affecting the African continent. Spanning four decades, these essays encompass the wide range of Sklar's scholarly contributions both to African political studies and the discipline of political science. While the author's influential writings on Nigerian politics comprise a significant portion of this collection, the great diversity of African countries and regions treated herein evinces a breadth of scholarly interest best described as Pan-African Continentalism. This volume also contains Sklar's seminal essays on the subjects of class, power, socialism, modernization, dual authority, mixed government, "developmental democracy," and "postimperialism." Readers will find that Sklar's frequent dissenting views from accepted wisdom, conservative and progressive alike, have yielded fresh thinking on numerous subjects of interest to all students of politics.

"The essays in this volume are representative of the remarkable breadth of Richard L. Sklar's scholarly achievements in African studies and political science. His mastery of the empirical domain in comparative and world politics, his uncanny theoretical vision, and his intellectual creativity are amply demonstrated in this collection. In reading these essays, which span a period of four decades, one is struck by the overall coherence and synthetic quality of his thought. While charting his intellectual course as a young scholar, Sklar had already formulated important analytical ideas that would guide him in his journey. It is equally apparent that from the outset, he possessed a clear sense of his mission. The fact that he chose to blaze a trail rather than follow conventional paths testifies to his integrity as a progressive scholar as well to his skepticism of orthodoxy in matters of the intellect."
-C.R.D. Halisi and Scott R. Bowman